How To Grow Hydroponic Cucumbers

There’s nothing more satisfying than growing a crop that is a heavy producer. That’s definitely the case with cucumbers, a prolific vining crop.

Growing cucumbers hydroponically indoors will be slightly different from growing them outdoors or in a greenhouse. Cucumbers will require extensive trellising and tying up. And space is crucial for growing cucumbers as they are a crop prone to mildew and mold.

Harvesting cucumbers is always exciting as you can get creative with what you’re planning to do with them. Whether chopping them into a salad, slicing them for sandwiches, or pickling them, cucumbers are a versatile crop to grow.

Let's get into how to grow cucumbers hydroponically!

When beginning your production of cucumbers, there are three methods to get started. Namely, germinating seeds, cloning cucumbers, and transplanting from the soil.

When germinating from seeds, you’ll need to provide them with temperatures of around 70-85°F.

You can also clone cucumber plants to ensure that you can reap a uniform crop. This being said, producing these clones takes time and effort. And for a crop that is easy to germinate within three to ten days, it shouldn’t be necessary.

Cucumbers are a summer crop and need warm temperatures, between 75-85°F during the day and a little cooler (about ten degrees) at night. They also love sunlight, doing best on up to at least 12-14 hours a day.

While you can use fluorescent light, it’s better to utilize a full-spectrum LED light, as it is more energy-efficient and will boost growth. Here's our recommendation: 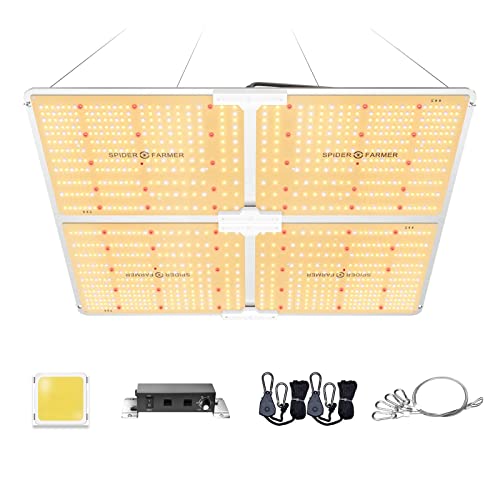 As you can imagine, cucumbers are heavy feeders, so you can easily meet this need in your hydroponic unit. Cucumbers will be thankful to receive a heavy dose of nitrogen when in their growth stages, with less during flowering.

When the cucumber is flowering it should be treated with more phosphorus and potassium.

The nutrient solution’s PH level should be around 5.0 - 6.0. This will mean keeping a regular eye on it and making minor adjustments.

For electrical conductivity, it’s best to keep within the parameters of 2.0 and 3.0 mS/cm.

Depending on the variety of plants you select, you should be able to harvest around 20 to 25 fruits a year from a single plant. And harvesting can start when the plant is around 12-14 inches.

Now that we’ve outlined what exactly are the optimum conditions, let’s talk about what hydroponic unit you might select when growing cucumbers hydroponically.

Where To Grow Hydroponic Cucumbers

The growing location for cucumbers is important, as they are very susceptible to diseases and nutrient deficiencies.

Make sure that the grow area has good air circulation and that there’s ample light so you identify any issues on the plants.

Nutrient deficiencies that are fairly common with cucumbers are:

We’d recommended investing in a simple clip-on fan to ensure the plant gets enough air circulation. And if any leaf looks like it is developing gummy stem blight and powdery mildew, remove it.

As the growing environment is humid and hot, you will want to institute a routine of pest control with either neem oil spray or by washing the leaves with rubbing alcohol.

And if you’re using LED grow lights, you might want to purchase a warming mat to ensure the plant stays at its optimum temperature, which is vital during the colder months.

Now let’s go through the steps of growing.

When growing cucumbers you have a choice of using two different systems. Ebb and flow or deep water culture (DWC). Both of these systems are easy to set up, monitor and grow plants in.

Let’s break down the pros of using either one of these hydroponic methods.

As a system that is ideal for intermediate growers, Ebb and Flow rigs work by flooding grow trays at set times during the day (around eight times a day) for around 15 minutes a rotation.

A system like the VIVOSUN Hydroponic Grow Kit, which is one layer with 36 plant sites, is exactly what you want and can be used for a variety of crops. 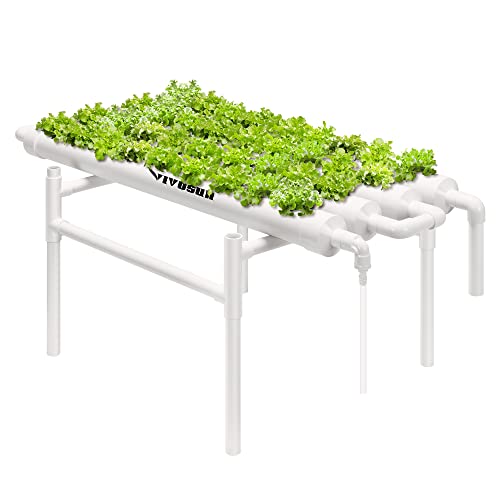 And it is easy to set up, has a pump timer, and nest baskets/net pots.

There are many variations to Ebb and Flow systems as well as brands. With these rigs the main issue will be spacing, as cucumbers are climbing vines and need ample space.

Some varieties will need only 3-4 feet, others will require up to 6 feet. Unless you’re operating a large setup, this will be difficult to accommodate in an Ebb and Flow system.

But if you are growing a limited number of plants, this shouldn’t be an issue.

Also considered a simple hydroponic system to operate, the main difference between a DWC and Ebb and Flow system, is that in a DWC the plant’s roots are constantly suspended in the nutrient water. DWCs also don’t really require water pumps and can utilize an air pump instead. Here's our recommendation: The Hydrofarm DWC System 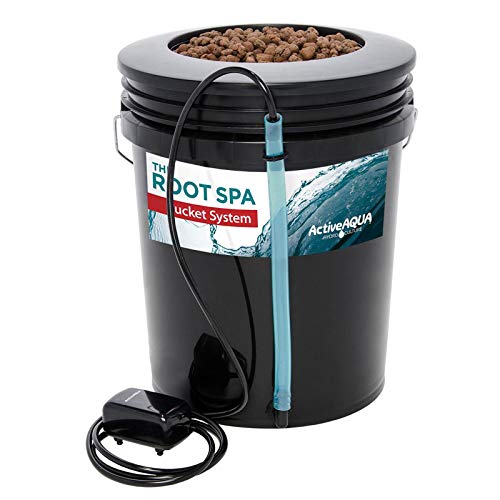 DWCs do require more monitoring of pH levels since the nutrient mix can easily push pH levels out of hand. But this being said, DWCs are completely isolated systems that can accommodate larger plants.

And with these individual units you can easily space out the cucumbers at a distance that suits them.

It’s this flexibility with the DWC that makes it our pick for growing cucumbers, and they are also easily available from many outlets, or they can be made at home.

Before purchasing your preferred system, make sure to select an area that has natural ventilation. While you can always install a fan it’s best to find a location that has air naturally moving through.

Once happy with your setup you can either purchase seedlings, or germinate seeds in the system. You can select a specific growing medium for this, like Rockwool or a seedling plug. Germinating seeds will start to show within 3-10 days.

Read what space your variety of cucumbers needs when fully grown and set up the layout accordingly. And growing medium for cucumbers should be coco coir, but LECA balls will do as well.

Make sure to have a lighting system working from day one, as cucumbers need ample sunlight. Nutrients can be hydroponic specific, or general purpose fertilizer with high nitrogen levels.

Cucumbers being climbers, you will need some trellising. This can be made with some string, a surface they can cling to, or on an old-school climbing trellis, the options are endless.

Adjust the nutrients according to the plants’ requirements. Cucumbers are monoecious plants, which means they produce male and female parts. These flowers are produced on the same plant. So, you don’t have the same issue as cannabis.

Female flowers will have a tiny cucumber at the base of its flower while males will be clusters of flowers.

You will need to help with pollination. Use a small paint brush or Q-tip and pollinate by hand. The other method is to rub the male flower into the female flower.

If everything goes according to plan, the cucumbers will be ready to harvest 50 - 70 days after germination. The fruit should be firm when being picked with no extensive yellowing.

Originating from South Asia, the cucumber is now grown on most continents. It is officially a part of the Cucurbitaceae family, which includes plants such as squash, pumpkin, zucchini, watermelon, and even luffas (sometimes spelled loofahs).

There are few varieties of cucumber, and it’s essential to choose wisely when sowing your crop. These varietals include:

When cucumbers are grown to be eaten, they are referred to as slicing cucumbers. These slicers are allowed to mature on the vine and have larger leaves for shade.

North American slicers are generally longer, smoother, have tougher skin, and have a more uniform color. While in Europe, they are thinner, smaller, and have a more delicate skin, which is why they are wrapped in plastic in the shops. They also have fewer seeds.

Although any cucumber can be pickled, commercial pickles have been bred to grow uniformly as well as have fewer voids in their flesh. Pickling cucumbers differ from their slicing family members by being shorter, thicker, less regularly shaped, and will have a bumpy texture on their skin with tiny white and black-dotted spines.

Color can vary from creamy yellow to pale or dark green.

Gherkins are also a part of the pickling family and are sometimes called baby pickles. They grow from 1 to 5 inches in length and have bumpy skin.

Bred to be sweeter and have thinner skin, these cucumbers are said to be easier to digest and have a more pleasant taste.

They can grow up to two feet in length and are nearly seedless. They are primarily grown in greenhouses.

Now let’s talk about the growing conditions that cucumbers need.

Growing cucumbers is fun and they are truly a versatile plant. Their fruit can be used in multiple ways and they can become a great feature during the season, as they can be trained into great shapes. Not to mention they produce loads of fruit.

However, this is a crop that will require monitoring, from the state of the leaves to the pH in the DWC system.

But we can guarantee one thing, you will have loads of fun growing delicious hydroponic cucumbers.

Bitponics is a participant in the Amazon Services LLC Associates Program, an affiliate advertising program designed to provide a means for sites to earn advertising fees by advertising and linking to Amazon.com. To support our site we may earn a commission if you purchase through some of the links listed above at no additional cost to you.